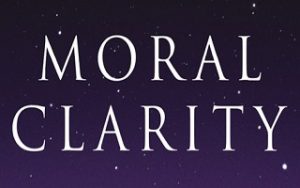 Alexandria Ocasio-Cortez used the phrase “moral clarity” describing her appeal upon winning a Democratic congressional primary in June. Moral clarity, she said, is “exactly the kind of principled action her (New York) constituents had voted for.” She wasn’t the first to use the term, writes Frank Guan in Sunday’s NY Times Magazine. The term was popularized in the early 50s with the onset of the Cold War. William Bennet used the term in the 80s in reference to the politics of Ronald Reagan. George W. Bush used the term in 2004 to justify his prosecution of the war in Iraq.

All want moral clarity. Churches provide Sunday Schools, Confirmation classes and youth ministry programs to instill in children and youth values and behavioral standards consistent with Biblical teaching. We want for ourselves and each other religiously informed ethical conduct and personal integrity. We seek “moral clarity” as we make daily decisions.

But as Mr. Guan writes, “Clarity can be as tragically easy to obtain as the vanity it often resembles—a combination of narcissism and hubris that’s liable to produce calamitous outcomes.”

The book of Job challenges our noble efforts at “moral clarity.” Job was a “blameless” and “upright” man. He was a “helicopter parent” who offered sacrifices to God on behalf of his children after they had a party if perchance “my children…have sinned and cursed God in their hearts” (Job 1:5).

In a bet with Satan, God allowed all manner of sorrow and catastrophe to visit Job. His livestock, servants, and ten children died. His skin was afflicted with horrible sores. His friends and wife asked “Why?” Why did bad things happen to a man of such noble “moral clarity” as was found in Job? Was he an immoral man as some of his friends thought of him?

The story of Job invites us to bring a large dose of humility to our noble efforts at giving answer to what is right and what is wrong, to our efforts at “moral clarity.” Bad things happen to good people, good things happen to bad people. We are not to let cynicism, pessimism or negativity rule.

The story of Job can remind us that the world is not governed by simple right and wrong; chaos is all about. Try as we might (and should) to do what is right, answers are not always as simple and easy as we would wish. St. Paul quotes Ecclesiastes (7:20) in his letter to the Romans: “Surely there is no one on earth so righteous as to do good without ever sinning.”

Job invites us to keep asking questions, to persevere. Jesus advised a questioner, “Strive to enter through the narrow door” (Luke 13:24). Be also reminded of these words of St Paul, “Let each of you look not to your own interests, but to the interests of others” (Philippians 2:4). In the days ahead, may each of us listen to others as we wish to be listened to. With humility, with openness may we strive together for principled “moral clarity” needed to address the many pressing questions confronting us as individuals, as a congregation and as a nation.