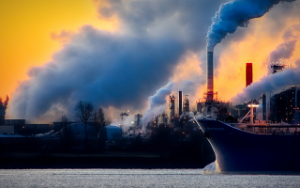 On September 26, 1983, 44 year old Lieutenant Colonel Stanislav Petrov of the Soviet Air Defense Forces was on duty at the secret command center outside Moscow monitoring early warning satellites over the United States. Alarms sounded warning of a launch of five Minuteman intercontinental ballistic missiles from an American base.

Three weeks earlier the Soviets had shot down a commercial Korean Airlines flight that had crossed Soviet airspace killing 269 people on board. President Reagan had called the Soviet Union an “evil empire” and Soviet President Yuri Andropov feared an American attack.

Petrov’s order was to report incoming missiles to his superiors. He disobeyed the order, violating Soviet military protocol. In his gut, he believed it was a false alarm. He was right. No missiles were approaching the Soviet Union, a false alarm had been created by “a rare alignment of sunlight on high altitude above North Dakota and the Molniya of the satellites” (Wikipedia).

Stanislav Petrov came to be known as the one man who “single-handedly saved the world from nuclear war.” Mr. Petrov died on May 19, 2017 at the age of 77 in Fryazino, a Moscow suburb where he lived alone.

This past Monday, May 6, the United Nations issued a report warning that “human exploitation of the natural world has pushed a million plant and animal species to the brink of extinction—with potentially devastating implications for the future of civilization.”

Sir Robert Watson, chair of the IPBES, said in a statement, “The health of ecosystems on which we and all other species depend is deteriorating more rapidly than ever. We are eroding the very foundations of our economies, livelihoods, food security, health, and quality of life worldwide.”

It’s tempting for me to ignore the warning. I’m 73, chances are I can blissfully drift my last years away oblivious to an imminent ecological Armageddon. Besides, I’m one person, what can I do.  But then I think of my children and grandchildren, the children in our Sunday School and those youth being confirmed next week who are assuming leadership in our church. I think of promises I make each time a child is baptized to “support and pray for” the newly baptized. And I think of Stanislav Petrov, one individual whose decision in 1983 made a huge difference for me.

I can and must do something.

First I will thank those young activists participating in “Fridays for Future” strikes throughout the world and their “Decarbonizing Revolution.” The protests began in August 2018 when 15 year old Greta Thunberg sat in front of the Swedish parliament every school day for three weeks protesting the lack of action on the climate crisis. The “Fridays for Future” protests she began quickly spread to 148 countries.

“Confusion,” not climate change, is the worst enemy we read on the “Fridays for Future” web site. We have a ‘people’ problem because politicians won’t act until people-pressure forces change. The role of youth, therefore, according to “Fridays for Future”  is to be a “youth action flag bearer” and “educator.”  “Start with your parents. Then your teachers and the principal. Then your councillors (sic) and church leaders. Educate, educate, educate! (www.fridaysforfuture.org) Thank you, Greta, for your leadership.

Next, we will use a “carbon foot print” calculator to learn of necessary lifestyle changes we must make so those who inherit the world we inherited will be able to describe it as described in Genesis: “God saw everything that he had made, and indeed, it was very good” (Genesis 1:31). The challenge to decarbonize is urgent.  As stated on the web site, “It is hard to decarbonize, but decarbonize we must.”