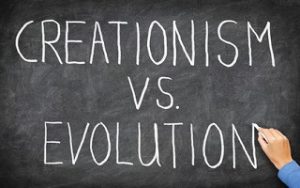 We were reading the story of creation from the book of Genesis in Confirmation class when a student confessed she had learned about evolution in her science class in school but in an effort to defend and protect her church, assured us she believed in God instead of evolution.

“In the wind” she heard religion and science were at war with each other and she was taking the side of her church, not her science teacher. I’d neither disparaged Charles Darwin nor his theory of evolution, I’d not mentioned either in a sermon. A failing on my part.

Since then I learned of “Evolution Sunday” in February when clergy are invited to address evolution in a sermon. I obliged, in honor of the students in my Confirmation class.

Religion and science are not at war with each other, writes Ethics Professor Ted Peters, but “battles” between the two take place. Religious people drive cars, use refrigerators and avail themselves of medical care, each gifts of science.

What then is the truth, asked the student in Confirmation class.

Jesus asked that question of Pilate, “What is truth?” (John 18:38) Like Jesus we too strive for truth using the minds we have to probe, explore, investigate and ask questions. “I am the way, the truth and the life,” Jesus said and so I ask Jesus to walk with me in my search for truth.

Some scientists can’t make sense of religion. Richard Dawkins described religion as “organized ignorance,” announcing he is “against religion because it teaches us to be satisfied with not understanding the world.” He wondered how anyone could believe in God and be a competent scientist.

Differences exist between science and religion. Professor Ted Peters calls those areas of difference, “battles.” The five areas Professor Ted Peters identifies as battle (fields) between science and religion are the following: (1) The Materialist Atheist assumes nothing exists outside of the material world, which means a transcendent God cannot exist. (2) The Laboratory Scientist relies on facts applying Darwin’s question “How did we get so many different species of plants and animals on our planet?” to work in the laboratory. Over time, Darwin discovered, natural selection causes forms of life to change (a valuable theory used to produce new medicines). (3) Creationism or Biblical Creationism claims species did not evolve but were created as they are years ago. Creationists believe in science, however, many would claim far better science is available to a creationist. (4) Intelligent Design posits evolution took place over a period of time under the control of an original designer who is God. 5) Theistic Evolution argues that God used evolution as the means for creating.

Professor Peters invites us to listen to friends who support each of the five claims but don’t accept the premise that science and religion are at war with each other. They are not at war.

Writing in Sunday’s New York Times, David Desteno, a professor of Psychology at Northwestern University, posits, “Hostility toward spiritual traditions may be hampering empirical inquiry” because “religious traditions offer a rich store of ideas about what human beings are like and how they can satisfy their deepest moral and social needs.” He notes, “A yearning for a science-religion synergy is growing in some circles.” Good.

Our ELCA takes a position concerning “the origin of life and evolution.”

“The ELCA teaches that the scriptures witness that all of life is a gift of God. However, the scriptures do not say, for example, how God’s creating word, “Let there be…,” brings creatures into being. Lutheran tradition has respected the work of the natural sciences in investigating phenomena in the natural world and explaining how they work and how they originated. Because our knowledge both of God and of other things is partial (I Corinthians 13:9), what is accepted at any one time as valid scientific knowledge and theory can be either added to or corrected by further scientific investigation and better theories to explain the phenomena we see in the world.”